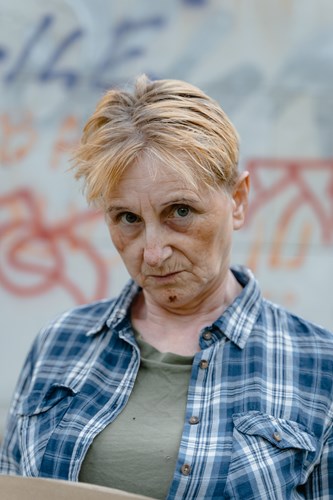 20 years ago, Charlotte was the victim of a home invasion and held at gunpoint while her daughter slept upstairs. Fearing for her own and her daughter’s safety, she left the house for good - but wasn’t able to access any support to move. In desperation, she stole money from her workplace to help fund alternative accommodation.

She was caught and sentenced for fraud. She describes that time as when she was stripped of her motherhood, her identity, everything. She developed a new identity – homeless, criminal. She felt that she was no longer a daughter, rather she was an embarrassment to her family.

Charlotte ended up in a hostel with others who were struggling with trauma; many of them were using substances to cope, and soon, Charlotte fell into the same pattern. Prolific shoplifting to support her substance use followed, and soon she was in the prison-hostel- rough sleeping cycle, experiencing abuse and bullying ever day. She struggled with destructive coping mechanisms, showed increasingly complex, violent and challenging behaviour, and her mental health deteriorated.

She struggled to engage in support - she couldn’t keep a phone safe, dry, or charged while living on the streets. She would continually shoplift or do sex work to survive, which often led to her being assaulted. She ended up sofa surfing in highly exploitative circumstances.

In 2019, she was offered a Housing First property, but feared that she’d get a warning or an eviction letter, just like she did at the hostels. When she first moved in, she was petrified to choose furniture in case she made a bad choice, or something went wrong.

Eventually, she began to settle in - with support - and to rebuild positive connections with her family, including her now adult daughter. She reduced her substance use and started activities that she once loved, such as swimming and music. Six months after moving in, Charlotte was signed off from probation for the first time in 20 years.

“The streets made me lose my identity, wiped it. I had no self-worth and was an empty person. Only drugs made me feel something, so I kept taking them, because I had nothing to live for. I couldn’t look in a mirror for the last six months…I didn’t know how to shop for myself. If I bought anything that was for me, when I went to prison the hostels would throw it out, so I stopped buying myself anything.

“I’ve got internet at my flat now, and my favourite thing is to put music on. I’ve rediscovered so much music that I love, that I haven’t heard in so long. It’s reminded me who I am. I walk down the street now and the police don’t recognise me. Prison seems a million miles away.”